Compare the best TV packages for Football this January 2022. Find the latest deals and information on TV services for the Premier league, English, Scottish, and European football competitions. 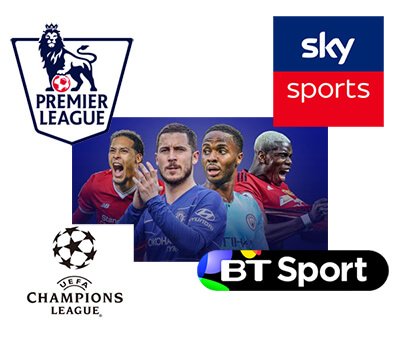 Before taking the plunge and signing-up for a TV package for the footy, it’s a good idea to weigh-up the many services on offer. The first question you should ask yourself is – how much cheaper is a package when also switching your broadband and landline to another provider. May be you just want to stream a match for a day, or different still, you may want to join on a longer contract to save on the monthly cost. Knowledge is power, the power ultimately to save money while still getting the right football package for you.

Sky Sports is still very much the main player for the Premier League and is available from all major providers. BT Sport have European football covered. But you’ll have to look at the details of each package, as prices vary and you may not receive all of the channels you want to watch. For example, you only get two Sky Sports channels with BT TV, and BT Sport is not available direct from Sky as part of their packages. You have to sign-up separately and direct with BT using your Sky Viewing card number. Other examples is that TalkTalk do not offer HD versions of any Sports channels, while Virgin Media are a good choice for combining what BT and Sky have to offer.

Lets take a closer look at the many different choices:

As mentioned, Sky are still very much the front runner when it comes to UK football on-the-box. Sky shows more Premier league matches than anyone else – with 128 live games scheduled for the 2019-2022 seasons. They have secure the best slots from Friday night, right through to Monday night football. This includes Super Sunday double headers and midweek games. Sky will also continue to show matches from the Scottish Football League (30 matches per season until 2020, then 48 matches 2020 – 2025). For the lower divisions, there’s the biggest access to the EFL Championship, League One and League 2 matches. With 183 live matches each season including live play-off matches and the finals (2019-2024 seasons).

UEFA European Qualifiers, National League and both Under-21’s and under-19’s championships are available from Sky. However, fans favorite the UEFA Champions League and Europa League are currently only available on BT Sport (until 2021).

NOW TV is Sky’s streaming service and aimed at those viewers who just want a day, week or month ‘Pass’. While you don’t get the flashy Sky Q setup or the ability to record or watch shows in more than one room – you do get access all Sky Sports channels and therefore all the fixtures mentioned above. Also, there’s no need for a satellite dish as customers receive the service via their broadband connection. Compare the different Passes and current pricing here: Sky Sports Day Pass | Sky Sports Week Pass | Sky Sports Month Pass.

While not in the market of sending out the TV cameras to catch the footy themselves – Virgin Media provide packages which gives customers access to both BT Sport and Sky Sports. The ‘Full House Sports bundle‘ has all Sky Sports (extra for HD), BT Sport in UHD, as well as other premium channels, fibre broadband and phone line services. If you simply go for Virgin’s Full House Sports TV package (without broadband and phone line) – then this normally works out more expensive.

BT Sport have established themselves as firm competitors to Sky Sports. Although they don’t show as many PL games as Sky, they’re still a must have service for most football fans. BT Sport will show 52 live Premier League games from the 2019-2022 seasons. It is worth noting that they don’t have the rights to show any EFL games (but they will show one game per week from the English National League). You do get access to more FA Cup matches than the normal BBC Sport service. Plus they have the rights for the next few seasons for the FA Community Shield and Women’s FA Cup competitions.

BT currently have the dual in the crown and pretty much all rights to European football until the 2021 season. The UEFA Champions League, UEFA Europa League, UEFA Super Cup, and UEFA Youth League are all shown exclusively to BT Sport customers.

TalkTalk offer the option to add both Sky Sports and BT Sport to one of their TV packages. Although all sports channels are available from both suppliers – currently channels are only available in standard definition – HD is not available at the time of writing. As with any provider, offers change regularly, so it’s best to check our football TV comparison table for the today’s best prices.

Amazon Prime is the brand new player and the latest entry into the football market. With the sheer size and wealth of this online giant, there’s no doubt that Amazon plan to break the stranglehold of Sky and BT. This may be modest at the moment, with just 20 PL matches per season between 2019-22. It will however be interesting to see just how much more Amazon are willing to pay to secure further matches thereafter. Will Sky and BT be able to compete? I think we’ll see a three horse race quite evenly fought in a few years time.

Best Provider for the Premier League

Sky Sports have the lions share of premier league football until the 2022 season, securing 128 games per season. BT Sport has increased their share with 52 games and Amazon – the new entry into game of football – will be showing 20 games per season as part of their Prime service.

Sky has a monopoly on the English football leagues games until 2024 season. With 263 games per season covering the Championship, League 1 and League 2. This includes the play-off and play-off final matches.

BT hands down has unrivaled and exclusive coverage until 2021. Showing the Champions League, Europa League, Youth League and Super Cup. If you want to view European football, then BT Sport is a must have service.

Sky and BT will both show 30 games for the 2019-2020 season. Sky see this increase to 48 games per season between the 2020-2025. The Free-view service BBC Alba will show 38 delayed games on a Saturday evening, plus 6 from the lower leagues. You can catch all the action for the Scottish cups between BBC Scotland, BT Sport and Premier Sport.

Best TV package for both Sky Sports and BT Sport

The Virgin Media Full House Sport and V.VIP bundles are the only packages on the market to include both Sky Sports and BT Sport as standard. You can also personalise a bundle from other providers which include both of these services but as add-on’s. Sky customers have to arrange access to BT Sport (with BT) once they have their Sky service installed, meaning you have to deal with more than one provider. Sky will at some point soon give customers direct access to BT Sport, as a new deal has been struck between the two providers. If you are a Sky customer and you want to add this service – please see Adding BT Sport to Sky to sign-up.

Which is the best provider for football in HD and Ultra HD 4K?

BT Sport have a dedicated 4K BT Sport channel. However, this is only available with their Max TV package and from some high-end Virgin Media packages (see current offers above). To access Sky Sports in HD with BT you have to pay extra for the HD pack. Sky Sports comes in HD as standard direct from Sky. Sky Sports is available in UHD 4K (only direct from Sky), but rather than having a dedicated 4K Sky Sports channel – a notification is shown to prompt viewers that there is a UHD version available at the time of viewing. To access Sky Sports in UHD, you need both the Sky Q 2TB box and the Sky Q Experience pack alongside a Sky Sports subscription.

Heading into 2019-2020 season and beyond, the world of football on TV is still dominated by Sky Sports and BT Sport. Both providers have increased the amount of matches they are showing. However, they both dominate in different competitions. Sky have the lions share of Premier League matches with 128 games, but BT Sport still have key fixtures amongst their 52 matches. BT Sport have the exclusive rights to all European football competitions. There’s also the 20 matches per season Amazon have now secured – so it really does boil down to what and how much you want to watch.

So who’s the best provider to go for to catch the footy? Good question, once you have decided on which competitions you want to watch, take a look at the current special offers above on our live comparison tables.

All TV deals
Best for Sports
Best for Movies
Best for Kids
Best for Everything
This site uses cookies to ensure you receive the best experience for your device. If you continue to use this site we will assume that you agree with our cookie policy